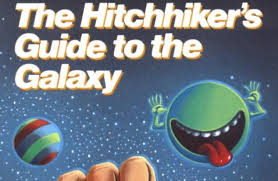 I’ve decided to write something on Hitchhikers Guide to the Galaxy and philosophy. But, I’d like to hesitate before I start.

I have always been slightly uncomfortable with books, articles or other works that take the form of “Philosophy and <insert piece of popular culture here>”.  While I do not have any strong opinions against this ever more popular form of popularising, they do make me uneasy. Perhaps, in my old age, I am become cynical. But, I do tend to think that this sort of thing does no service to philosophy or to the original text. However, I’m open to the possibility of it working.

I have, so far, only bought two of these types of book. The first was the worryingly titled Avatar-Philosophy (and -Religion) or Faitheism. I got this because I was in the process of working on a paper for the MMU Philosophy Co-operative called Avatar and Solipism: Why Avatar is a Window into just about Everything Wrong with our Culture and, while on a bus to visit my friend, decided I should do some proper research with my newly acquired 3G Kindle. I read quite a bit of this book, but found that its author largely used *Avatar *as an excuse to talk about his own ideas. It did not say a great deal about the philosophical implications of the film itself.

The other book is Hitchhikers Guide to the Galaxy and Philosophy, which I am much more optimistic about being good. I haven’t had a chance to read it yet, but a glance at the contents page tells me that it probably contains an appropriate mix of what I already agree with and what is so far from the mark that I am likely to want to punch something. What makes me optimistic, though, is that most of the articles do seem to be looking at philosophical issues raised by different scenes and jokes in the books rather than using a piece of popular culture to dumb down philosophical ideas, as a popular platform to peddle new ideas, or to argue outright that the text contains some hidden philosophical thesis (it doesn’t).

To get to the point of my hesitation, rather than writing a post on the philosophical implications of H2G2, I’d much prefer to just force people to listen to/read/watch it. They’d enjoy it much more than another ‘Philosophy and…’ text. But, this project doesn’t seem to be going well as I have so far utterly failed to get any of my friends to take it seriously (or amusedly). So, in short, I’m resigned to offering the following two opinions about Hitchhikers Guide *instead, *at the request of my fan.

Concerning point one, the series is littered with references to philosophical issues from ethics and politics to metaphysics. I will give some brief examples.

Concerning ethics, there is the attempt to breed a pig that wants to be eaten, thus avoiding the need to be a vegetarian, along with, in the same scene, the suggestion that many vegetables are very clear about not wanting to be eaten. This is a good platform for the questions “If a pig wanted to be eaten, could we ethically eat it?” and “Well, aren’t vegetables life forms to? Why is eating veg OK but animals bad?”

Concerning politics, there is the secret leader of the galaxy that is a direct reference to the old Platonic argument that anyone who wants to be in power probably shouldn’t be.

In response to this, the galactic government chooses to take orders from a wise hermit living on a secret planet. Further, this hermit is a philosophical sceptic who doesn’t even believe he can know if his cat exists, let alone the people he rules over. “It merely pleases me to behave in a certain way to what appears to be a cat.” This, seems to me, to be a parody on Plato’s idea of the philosopher king.

The final example of philosophical relevance of *Hitchhikers *also takes me onto the next point. This example is the discussion of the Babel Fish. Please watch the TV Show version of this here.

Before going through what happened in that video, I should probably say what my second point is. The humour in Hitchhikers operates usually by presenting something very familiar only to, at the last minute, invert it and give us something very unfamiliar. E.g. “Being in hyperspace is incredibly like being drunk” “What’s wrong with being drunk?” “You ask a glass of water.”

Now, this type of joke obviously isn’t original to Adams. But, it happens so often, sometimes more than once in a single sentence, that it’s effect is almost, to use his word, ‘mindboggling’.

This happens several times through the discussion of the babel fish. First, the is the obvious perversion of the teleological argument for the existence of God. This class of arguments, a version of which has gained currency as the ‘intelligent design’ theory of the origin of species, argue for the existence on the God on the basis of observing things in the universe that appear to require a designer or manufacturer for their existence. It is not a very good argument.

One version of the teleological argument that I read on a leaflet pushed through my door from a fundamentalist Christian group, said ‘Look at the banana! it fits exactly in your hand and comes in its own protective wrapper! Something so perfect must have been designed for us. This designer is God.’ The logic is that it is so improbably that something so useful and perfectly adapted for our purposes could arrive by chance. A more sophisticated version would be to argue that the natural laws of the universe are so finely tuned to support life that it is improbably that they arrived purely by chance.

Through the Babel fish, Adams runs this argument backwards by telling us that the usefulness of the Babel fish and the improbability of its arrival by chance prove that God doesn’t exist, as you have just seen. So, the familiar thing is the teleological argument, but it is inverted. At this point, we  seem to be presented with a new familiar thing: an atheist humanist having a go at religion. We then approach the remaining sketch with this in mind, comfortable in the familiar once again. But, Adams inverts this as well by having man prove that black is white and be killed on the next zebra crossing. This is a dig at the limits of rationality and the arrogance of humanism, whether or not Adams was himself a humanist. Indeed, this section, far from being an endorsement of Dawkins’ use of Adams in The God Delusion, shows his humour to be far more sophisticated than the former’s “serious” argumentation.

The final switch given here is ‘Meanwhile, the poor babel fish, by effectively removing all barriers to communication between different races and cultures, has caused more and bloodier wars than anything else in the history of creation.’ A dig at the liberal vision of universal understanding leading to wordly/universal peace. Why, now we think of it, would removing barriers of communication stop people being crappy to each other?

Now, I said that this inversion of the familiar is something it is good to be able to cope with in philosophy. Learning about the history of philosophy is a process of successively having your beliefs turned upside down. You start with Plato, think he is very hard to deal with, and then Aristotle proves him wrong. You think that Hume is amazing, and then you read Kant.

But, the implications of this are not just found in reading philosophy. The biggest threat to philosophy, in my opinion, has always been the familiar. Admittedly, many philosophers have appealed to common sense to develop and defend their philosophies. They are, not just in my opinion but primarily in Heidegger’s, mistaken to do so. More so than in any other age, our culture is saturated with common sense truisms, received in an uncritical way and allowed to sediment into self-evidence. More so than in any other time in our past, we are locked into obvious, the familiar, into what they say and what is said.

Admittedly, first and foremost, we are dealing with comedy fiction rezeptfrei viagra bestellen. And in that vein, I leave you by asking that you watch my favourite bit of the whole thing by clicking here.