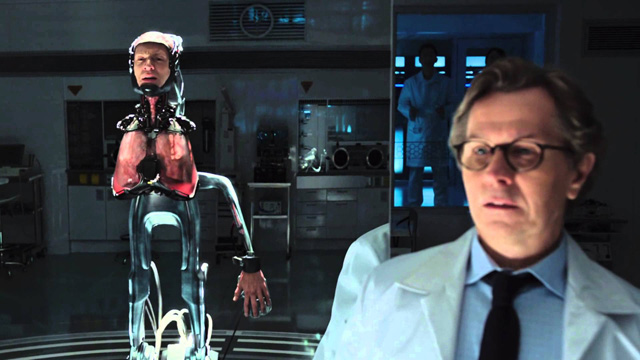 The Robocop reboot from earlier this year gave me faith that sci-fi isn’t dead. I expected a moody Nolan-esque remake, similar to the 2012 Dredd, that would replace the clever satire of the original with fantastically boring special effects. I was wrong. Admittedly, it lacks the subtlety of the original to the point where I wouldn’t even want to call it an action film; there aren’t many action scenes and, to be honest, hardly anything happens. The driving force is, instead, the problem of human freedom in the face of increasingly perfect technology.

The film portrays two parallel conceptual battles. The first is the battle between the human and machine aspects of Robocop. The corporation, OmniCorp, discover early on that Robocop’s human elements are effecting his efficiency. His emotion and compassion mean that he hesitates before shooting and is simply not able to move or think as fast as the drone technology that his body is based on. To resolve this issue, they bypass his will so that, whilst he is in combat mode, the machine body acts like a drone, shooting and arresting on its own, while giving him the illusion that it is really him doing it.

Eventually, his humanity becomes such a problem that they sedate him and allow the machine to run on its own. But, after an encounter with his wife, his humanity is reawakened, and he works to arrest the corporate heads who have attempted to assassinate him. This is a battle about Murphy’s human freedom, his will, and whether or not he can take control of the technology that has bypassed his autonomy.

The second battle is about political freedom. OmniCorp have sophisticated drone technology that has practically replaced human troops in military action. This allows efficient policing of occupied territories in the middle east without risk to american lives. They work absolutely perfectly, but a law called “The Dreyfus Act”, headed by Senator Hubert Dreyfus (an interesting reference to the renowned american philosopher and reader of Heidegger) prevents the use of these drones on american soil. Hence, we have,on the one hand the land of the secured and the other the land of the free. The security technology maintains american freedom at home, but, if it were implemented there, freedom would be annihilated. OmniCorp develop the Robocop programme, conceived as a drone with humanity, in order to shift public opinion on drone technology to repeal the Dreyfus act and make a lot of money selling the technology to police forces.

As a line into the issues involved here, it might be interesting to consider two differences from the 1987 original. The first is that the 2014 film has far more trust in the performance of technology. In the original, one of the earliest and most infamous scenes is the malfunctioning of the ED-209 robot. In a board meeting, it fails to recognise that someone has put a gun down and kills him. In the new film, the first thing we see is the ED-209 units working perfectly overseas in militarily occupied territories. In 2014, none of the OmniCorp drones malfunction at all.

The second point of contrast is that in 1984, the OCP’s aim is to develop robotic policing in the US and then sell it to the military for use overseas. In 2014, the military is their only legal american customer, because of the Dreyfus Act. The films are mirror opposites on this point.

As far as I can tell, the reason for both of these changes is because the 1987 film is more about the privatisation of the public services than it is technology, cybernetics and their threat to freedom. In 1987, we see the ED-209 consistently malfunction as a warning that corporations will always cut corners for profit, and ought not to be trusted with essential services like law enforcement (“Who cares if it worked or not?!“).

This becomes even more patent in Robocop 2 (1990) where OCP create a scenario in which they take ownership of all public assets of the City of Detroit. When the outgoing mayor demands of the The Old Man where this leaves democracy, he replies “Anyone can buy OCP stock and own a piece of our city. What could be more democratic than that?”

In some ways, this message is more timely than the 2014 discourse on technology. With public spending cuts bringing our country’s councils to the point of no longer being able to provide statutory services, how far away are we from a time when local government could be replaced by some sort of “Civic Administration Franchise” that private companies bid for? I digress.

In the original film, ED-209 is a joke. It is a barely functioning, underfunded failure demonstrating the effect of a profit motive on an essential public service: an unsurprising theme at the dawn of neo-liberalism. In Robocop 2014, however,  we are confronted with the increasingly efficient security technology as a threat to our freedom; in other words, ED-209 is PRISM. The entire film plays out the problem of how perfectly functioning security technology, or what we might call “technological policing”, is a threat to human freedom and the american way of life.

In the reboot, Murphy retains his memories, his personality, and his humanity. In one brilliant scene, the machinery is taken away, and we see what is left of him: his brain, lungs, right hand, and face. In the 1987 film, a scene like this never happens. This is not because the graphics technology wasn’t available, but because the distinction between the man and the machine is never drawn. He is the machine.

It is true that the original Robocop’s humanity does become a problem in a way that never occurs in the 2014, insofar as we are not sure if he is still Murphy or even still human. He does not retain full memory of his family (“I can feel them, but I cannot remember them”). And, when OCP interfere with his programming in order to control him, they are not manipulating the machine as opposed to his humanity, they are manipulating him.

For this reason, the original Robocop is not able to go against his directives. This becomes an issue in both Robocop *and *Robocop 2. In the sequel, OCP fill him with hundreds of focus-group-led directives such as “do not drive through puddles when people are walking past on the sidewalk”. He has to shock himself and wipe the directives in order to regain control over himself. In the first film, he is limited by Directive 4, which prevents him taking action against a senior OCP employer, and is only able to kill the bad guy once he is fired.

Yet, in the 2014 film, Robocop overcomes the parallel limitation (his inability to attack someone labelled as a “red asset”) in an expression of pure will power. In short, his humanity is able to wrest control of the machine from OCP. Something only possible because the new film draws that distinction between the remains of Murphy and the prosthetic body. This is why the new Murphy has to keep his family and maintain a relationship with him. The film is about the battle between humanity and the machine, and his family is what makes him human.

Ultimately, the message seems to be that as soon as we start to use technology on ourselves to ensure our security, it puts freedom in jeopardy unless our will is strong enough to overcome it and control it. At this point, the film betrays an almost spiritual worship of the will and of the power of human freedom that comes close to contradicting its premise. If a strong will can control technology, then why would it be a problem allowing it to police our lives as long as the right people are in control?

If we were to move beyond the film and attempt to engage with the philosophical issues raised, we would need to turn to Martin Heidegger. The problem of opposing human freedom and technology in this way is that both are conceived of in terms of the control of the will. But, it may be that the will has nothing to do with freedom and the attempt to control technology only repeats what we are trying to prevent.

However, I do not mean to imply that the film attempts and fails to solve the problems it raises. The final sequence leaves us in no doubt that the political battle for the Dreyfus act is not over and that the corporation is still going to cause problems. But, it does make us think about this issues confirming that good science fiction has nothing to do with science fact, a cinematic experience of another world, or lasers and explosions, but with the presentation of philosophical, moral and political problems. Who knows, maybe hollywood films are starting to get good again?