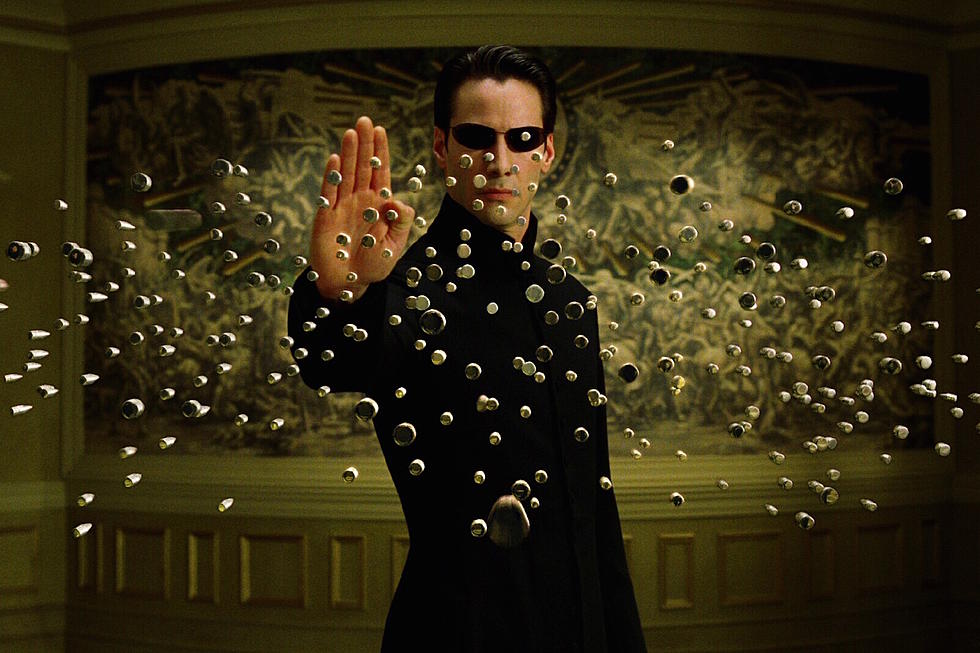 I want to speak about a film I recently rewatched for the first time in years: The Matrix Reloaded. This is a fact I’m sure most of you consider right and normal. Who on earth would want to watch The Matrix Reloaded more than once? Well, me. I liked it, and I don’t care that most other people didn’t.

In truth, I think what really killed The Matrix *Reloaded* was the third instalment: The Matrix Revolutions. The middle film’s cliffhanger ending had promised a really interesting third film, but all of the issues were resolved within about twenty minutes, and the ending was confusing as hell. Then, we realised that Reloaded had been confusing as hell too, and we’d given it an easy ride because we’d expected the third film to explain everything. It didn’t.

Now, I’m not saying every film should make sense, but every film should make sense. I don’t buy into this mysterious, let the audience make up their own ending crap. Maybe it’s because I’m Catholic, but I like there to be a canon, and, even if something is left unsaid, I like there to be enough information about the universe and plot available to work it out. The Matrix Reloaded has enough decent fight scenes and graphics that still more or less hold up today to allow me to forgive it, but it has many loose ends.

Watching The Matrix Reloaded *twelve years later (!) has made one thing that always bothered me a bit clearer: “the one as just another instrument of control” stuff.  The original film has a basic messianic plot where the main question is whether or not Neo is *actually the one, a free human with unexplained ability to control The Matrix because of his greater insight into the falsity of its virtual reality, or rather conscious insight of its reality as virtual. He’s basically a mix of hacker, superman, and Jesus (as if I could hate this film).

In the sequels, we find that the One is actually a known quantity by the machines. The Resistance and the One are necessary products of an “equation” that the Architect, machine designer of the Matrix, seeks to balance. The Architect explains to Neo–in abysmal pseudo-intellectual dialogue, like Stephen Fry vomiting a thesaurus—that in order to keep human inmates sane, they are given a unconscious choice whether to be a part of it or not. The small fraction who choose not eventually free themselves and organise in the underground city of Zion.

Though the process has altered your consciousness you remain irrevocably human. Ergo, some of my answers you will understand and some you will not. Concordantly, while your first question may be the most pertinent, you may or may not realize it is also the most irrelevant. — The Architect “speaking”

When the system produces the One as an inevitable flaw emanating from free will, it appears to Zion to be a way of fighting the machines and a path to final victory. In reality, the One is expected to return to the machine mainframe, “the Source”, from where his power comes and collaborate in the destruction of Zion in order to prevent the genocide of humanity.

Forgive me if I was just a bit stupid, but as a fourteen-year-old, I didn’t not even nearly understand any of that. I still find the “return to the source” stuff a bit strange. But, one thing I did understand a bit more after watching it again was it’s political meaning, deliberate or not. And, I think I only really understand this after Snowden and PRISM.

I’ve spoken before about the surprise the liberal hippy geeks felt that the creations they produced for the democratic good of humanity have been to some extent used to erode that freedom. The Matrix Reloaded tells us something about that problem. What appeared to be an instrument of salvation, as with the home computer “revolution”, was, in virtue of the fact that it had its “source” in our prison (which I guess for liberal hippies is the state), was just another instrument of control.

In embracing this role within the system, Neo became an unwitting collaborator, as did Silicone Valley, the Free Software Foundation, and the Open Source Community—I am reminded of Stewart Lee’s description of Twitter as “a state surveillance service run by gullible volunteers, a *Stasi *for the ‘angry birds generation’”. Just as the state funded technology, developed for military purposes, is used by the state as a means of control so the One contained the risk of total domination of human freedom.

It is banal to point out that dystopian Sci-Fi contains a warning. The* Terminator and *Logan’s Run warned us about giving too much power to machines, and Star Trek V: The Final Frontier warned us what happens when you let William Shatner direct something. *The Matrix’ *warning is the inverse of a Holderlin verse Heidegger liked to quote. Not that “Wherin lies the danger, the saving power also”, but “Wherin lies the saving power, the danger also.” What is given to us by a dangerous political context as a means of salvation is, by necessity, yet another danger.

I do not subscribe to the anti-statism of the liberal hacker brigade. But, just as technology provides us with the opportunity to solve more political problems than any generation before, and has increased massively with each generation for decades, so to the danger increases. I’m tempted to say that technology is a problem that will never be solved. Because, to let the problem be solved it is to stop thinking about it, and allow technology to think for us.