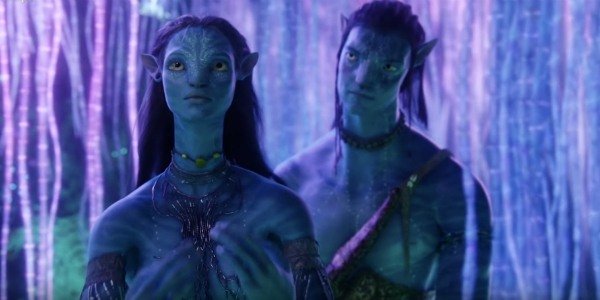 Avatar is a film that argues that human beings are mortally evil and inescapably isolated. It claims that the only moral solution to which is to betray one’s own kind and convert to being a member giant blue alien species isn’t so damned. In spite of this overtly pessimistic and cynical worldview, it is seen as a utopian fantasy film. It was so popular that it was the first film to gross more than two billion dollars, and unbelievably there are three sequals in the works.

My question is this: how is this possible? What desire does this pessimistic, anti-humanistic film fulfil? Why is it that it caused depression in fans , who perceived the world it presented as paradise? The answer can only be that our culture believes that humanity is fundamentally incapable of achieving happiness. Not by accident, not because of political difficulties, but a priori. Avatar is not just a terrible film, it is concrete proof of european nihilism.

It’s important to recognise that the message of Avatar is not that of Pocahontas, although the plot comparision is just and hilarious. In Pocahontas, John Smith is taught to be one with nature by native americans. The difference between the opposition of western civilisation to native americans and that between humans and the Nierti is simple. Westerners and native americans are of the same species. John Smith is taught to fulfil his truly human potential, a potential that was always ready to be actualised. Jake Sully, on the contrary is, as human, incapable of achieving the togetherness, immortality, and oneness with nature of the Na’Vi as he does not possess the necessary organ: a USB cable plugged into his nervous system.

Humans in Avatar lack the necessary biological properties to achieve oneness with nature. They are irredeemably evil capitalist exploiters of nature. Jake Sully only achieves this by being becoming his Na’Vi avatar. He overcomes the limitations of humanity, becoming something greater.

That this is a well-seated belief of our culture is the only explanation for a biological USB cable in a terrible film to seem like a good thing. The Na’Vi gain an afterlife by plugging their USB cable into a massive tree that is a harddrive. They are one with nature by plugging into trees and animals, gaining a genuine, physical connectedness that allows true communication. They are one with each other in the same way.

The basic presupposition of Avatar is a materialistic solipsism. Solipsism is a philosophical doctrine that states that the only thing I know is that I exist. This is because while I have an absolute intuition of my existence in self-consciousness, I have no such intuition of anything else. I don’t really know that the world exists, that God exists, or that other people exists. This is materialistic in Avatar because it is conceived, not as the independent substantiality of a spiritual substance, but as a lack of physical properties. Human social cognition is only an illusory attempt to bridge the gap between individuals. Love does not present a real connection between partners, but the Na’Vi USB cable does. It provides a physical link between beings in a way that language and emotion never could.

This is fundamentally nihilistic, a symptom our culture’s complete misunderstanding of the nature of the human being. Phenomenology is one discipline in the 20th Century that has vehemently argued against this misunderstanding. Whilst typically atheistic, it forces us to turn to our experience to recognise that (among other things) human beings are fundamentally bound up with each other, implicated in each other, and gain a sense of self only because there are others.

The most famous example of this argument is Sartre’s “look”. Sartre talks about a voyeur watching a couple have sex through the keyhole of a door. One presumes this is from experience. Whilst watching the couple, the gazer has no sense of self. His consciousness is soley the consciousness of what he is seeing. He only gains self-consciousness when someone comes down the corridor and sees what he is doing, at this point the gazer feels shame.

The claim here is that the only reason that recognition of oneself in the other could bring one to self-consciousness in shame is because we are implicated with each other at a fundamental level. If we were truly social atoms, no other could ever have such an effect on us.

The success of Avatar is predicated on the inability of the westerner to believe in what it is: a social being. It is an indication of a sense of isolation and quiet despair in our time. The only good that comes of it is that it is a case in point for the need for phenomenology.