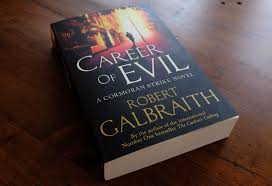 More so than any other of Robert Galbraith’s books, Career of Evil reminded me of Harry Potter. It is a bit tired to keep bringing up the fantasy series every time J. K. Rowling is mentioned, but I think the villain of this latest book and that of Harry Potter can be interestingly compared. Both ‘go beyond usual evil’, to use Dumbledore’s phrase from *Harry Potter and the Half-Blood Prince. *And, in both cases, we as readers are forced into their perspective as they commit their crimes—a device, to my memory, Rowling-as-Galbraith has not used before.

Harry Potter and the Deathly Hallows, the seventh and (no-longer) final installment in the multimedia franchise, does this the most. In this book, Harry is frequently drawn into Voldemort’s mind (or is it soul?), experiencing his actions and thoughts as though they were his own. This includes, most distressingly, Harry being forced to relive Voldemort’s detailed recollection of murdering his parents as though he were murdering them himself—something those who would be quick to interpret the incredibly dark content of Career of Evil as some sort of statement that she has left the allegedy happy fairytale world of Hogwarts ought to remember. This access into Voldemort’s mind is instrumental to the latter’s downfall.

In Career of Evil, we, like Harry, are forced to experience acts of murder and mutilation, because it is a novel, as though they were our own, and not simply as a spectator as it will appear in the TV adaptation. Yet, unlike Harry, we have no agency in the universe wherein the crimes are occuring. Harry willingly endures the horrors of Voldemort’s psyche against the advice of his friends and mentors because he gains valuable intelligence and to ultimately defeat him. With the crime novel, we have no such agency. It is entirely up to the protagonist to work out whodunnit, and the clues we glean from his psyche cannot be passed onto them.

This raises a question. Harry endures the horror so he can gain useful information to win a war. But, why do we read books and watch films with such violence? I haven’t seen (or looked for) any controversy-mongering coverage of the novel, although readers have been warned by Rowling’s claim she was given nightmares by this novel. I expect it to come, as such an article would make a columnist some money.

My research into the subject matter of #CareerOfEvil literally gave me nightmares, which has never happened before. It’s a scary book.

The question of violent entertainment seems to keep coming up as mainstream fiction gets bolder. The question is elsewhere more prominently, e.g. is it really okay to watch rape, the burning to death of children, and the naked flogging and humiliation of a woman on Game of Thrones? Probably, but, we don’t seem to know why.

Perhaps the question stems from the fact that film, tv, books and games are classified as “entertainment” which is in turn classified as something people do because they find it pleasurable. A fallacy occurs when one runs that backwards and suggests Game of Thrones’ viewers find its violence pleasurable. In Career of Evil the question  is not “am I a bad person?” or “should I feel guilty about reading/watching this?” (both liberal in origin). It is that this sort of violence happens in our world.

The Cormoran Strike novels have been whodunnits containing social commentary. The Cuckoo’s Calling revealed the lives and worries of the mega-rich in London (including an interesting moment where a working class person suddenly becomes incredibly rich). The Silkworm showed an insight into the publishing industry and the mind of authors.  Going for a more fundamental cause, Career of Evil shines a spotlight on violence against women and girls in a way that reminds me of Stieg Larrson, the Swedish title of The Girl with the Dragon Tattoo being “Men Who Hate Women“.

The violence witnessed in Career of Evil, unlike the magical murderousness of a red-eyed Voldemort, exists in the real world. The murderer goes beyond usual evil, but the crimes comitted by others in the book are far more usual than we like to admit. As such, what I said above about having no agency is, in the most important sense, completely untrue. It is, shamefully, our world that contains such violence toward women and the true crime in the book is not the crime investigated in the plot, but the many unsolved cases of paedophillia, rape and domestic violence happened upon by the investigation that are treated as unsolved and beyond help.

While Game of Thrones presents such violence as a feature of the past, Career of Evil reminds us that such things exist in the present and not just in our entertainment media as harmless trifles with no moment. As such, the following comment might well be saying something to our culture itself.

Strike knew how deeply ingrained was the belief that the evil conceal their dangerous predilections for violence and domination. When they wear them like bangles for all to see, the gullible populace laughs, calls it a pose, or finds it strangely attractive. (54)