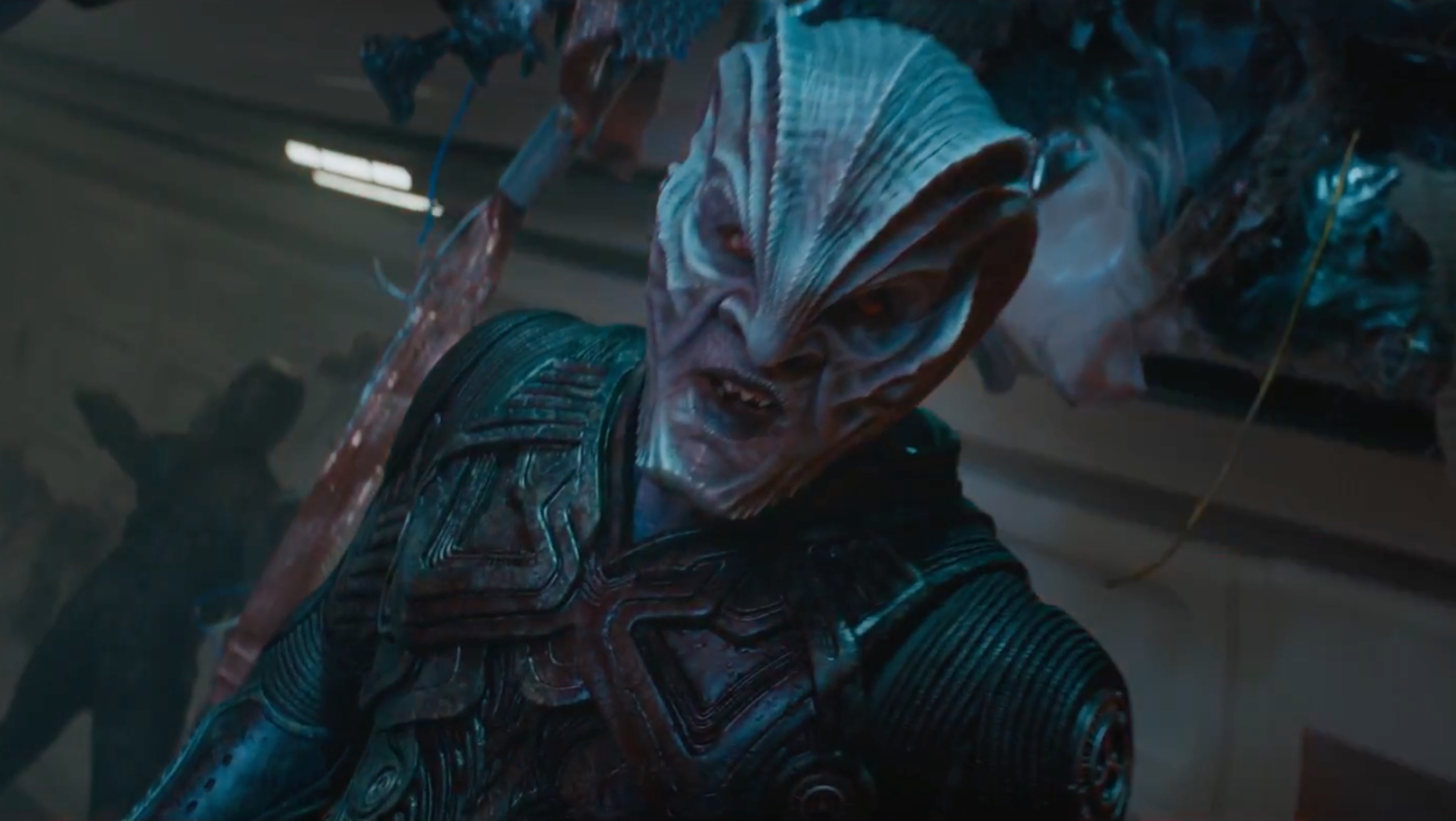 The new Star Trek film is not only a good film, but it is actually an actual Star Trek film.Star Trek: Beyond or Star Trek: XIII or Star Trek 3 or Star Trek: Mysterious Subtitle II, in the words of RedLetterMedia’s Mike Stoklasa “It was like someone had shocked the corpse [of Star Trek] […] and its just kind of sitting there… and you hear… beep… beep…”

Now, don’t get me wrong, it isn’t a very good Star Trek film. But, to be fair, hardly any of them are. Star Trek has always been imperfect. But, at least we can see a flicker of the franchise’s soul returning in this film. Star Trek: Beyond is superior to the previous films in the following ways. I think this is actually going to be spoiler-free, but I make no promises.

A bit controversial, as fandom is intrinsically conservative. But the Yorktown space station, new aliens and characters; these are all very welcome especially after Into Darkness so cynically and shallowly plagiarised Wrath of Khan.

A major call back to the events of the prequal era! Enterprise was a grossly underrated Star Trek series, and, given that it came last, has obviously not had the same opportunity to be referenced and built upon like the rest of the canon. (Although, in Star Trek 2009, there was a bit where Scotty says he’s been stationed on the ice planet because he killed Admiral Archer’s beagle).

The Climax is not a stupid space battle

Since the dominion war in DS9, Star Trek became obsessed with space battles. But, Star Trek had never been about space battles up until that point. Even First Contact, which does have a Borg space battle at the beginning, gets this over with and goes straight to a timetravel plot. First Contact has more in common with The Voyage Home than, say, The Wrath of Khan insofar as most of the film is spent on the Earth of the past and inside the ship.

Yet, from Insurrection and especially from Nemesis, every Star Trek film has to have a big starship battle at the end. That may not sound a lot, but that is four purportedly different films over 15 years.

Star Trek: Beyond, instead, has a climax that… okay, well it does have a space battle, but not a stupid one. It has an intelligent Star-Trekky space battle. The archetypal Star-Trekky space battle is the famous scene from Wrath of Khan where, despite having already been crippled by the Khan-controlled USS Reliant, Kirk manages to strike back by covertly getting his bridge crew to take over the Reliant’s command controls and lower the shields. This is a clever use of tactics and technology. It is not about having a bigger ship and blowing it up. We get something similar in the new film.

The Bad Guy’s Motivation is Philosophical, not Vengeance

The Half in the Bag review I linked to above is wrong, I think, to suggest that the antagonist is just motivated by revenge. This taps into RedLetterMedia’s earlier critiques that all the films from First Contact to Into Darkness have a vengence plot.

The motivation of Krall, or however you spell his name, is actually political. This is a spoiler so maybe stop reading. Krall is a starship captain from the time period immediately after Enterprise. His ship crashes and he is not rescued by star fleet. On RedLetterMedia’s reading, Krall then seeks revenge by aiming to destroy the federation, having felt he’d lost his place as star fleet moved from the Earth Military to The Federation’s exploration programme.

But, it’s more subtle than that. Krall is a fascist. I thought this was all a bit on the nose, to be honest. He goes around talking about how the cooperation inculcated by the federation prevents us from taking part in the “struggle” that is essential to all life. Which, to me, is like screaming “I’M A NAZI!!!”.

In taking this line, Star Trek: Beyond explicitly enters into one of the franchise’s most-returned-to themes, and probably the one most authentic to Gene Roddenberry’s original vision. Humans have only two possible destinies: international socialism or expansionist fascism. This idea is at least as old as the TOS episode, Mirror, Mirror, the first to introduce the mirror universe later developed by DS9 and Enterprise. In an alternate universe, humans develop an empire so cruel it makes the honourable Klingons look like Buddhists.

This is also a strong theme in the Dommion War: the idea that it’s easy for humans to be ethical in peacetime but as soon as they enter war, their ugly violent past that was supposedly abolished comes back with avengence. This is the starting premise also of TNG, with Q putting humanity on trial for being a dangerous savage child race. Humanity is simultainiously the greatest hope and greatest threat to the galaxy.

Perceiving himself out of place in the progressive superstate that is the United Federation of Planets, ultimately abandoned by his own to a desert planet, Krall reverts to the innate fascism of the citizen of the west and attempts to destroy his own culture’s greatest achievement, tearing it asunder. Not for revenge, but to put his Volk back in touch with the essential struggle (Kampf) that sustains it.

How fitting, then, that this film airs so soon after Brexit and in the year that Donald Trump is on the ticket to be president of america. The world is far from OK, but anyone denying the progress that has been made is guilty of a faux cyncism. In the light of this progress, and in part because ofit, fascism rises again and, by definition, attempts to break everything apart to some vague idea of a simpler past.