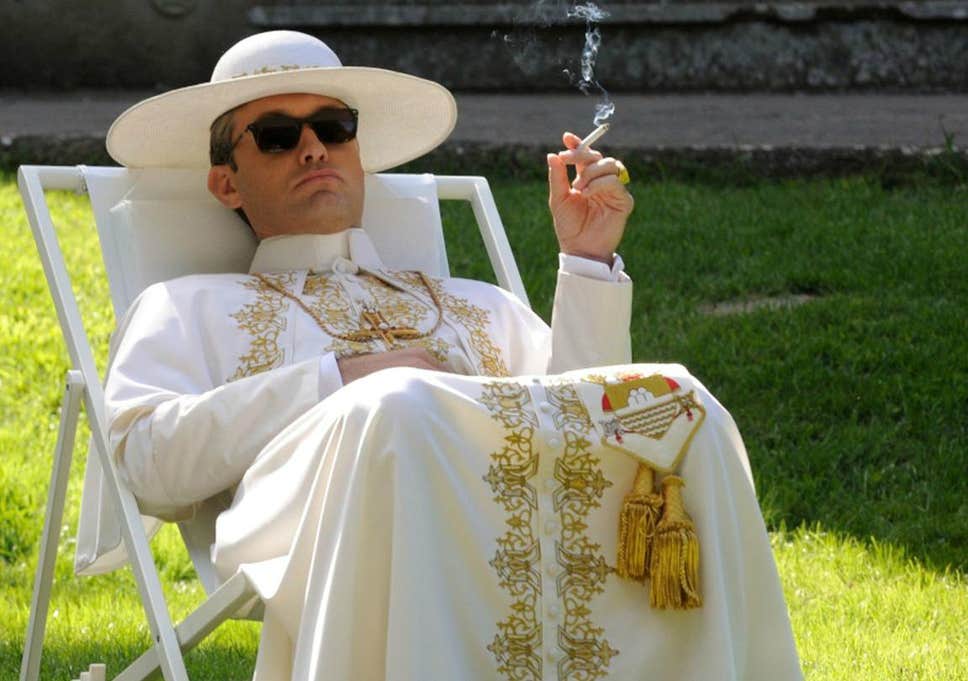 The philosopher Jacques Derrida once said ‘Inheritance is an act’. At least, I’ve been told he did. I’ve never read it myself, and as much as I care about both people who occasionally read this blog I don’t care enough to go chasing up a reference. More importantly, the statement “inheritance is an act” is true. Our history is not something lingering in our past behind us, unchangeable and completed. It is before us and ready to be taken up; it is there for us to learn, ignore, understand and misinterpret, for us to use and to abuse. Which course we select, how we choose to inherit it, is an act. The Young Pope deals with this problem in the specific institution of the Catholic Church.

Pope Pius XIII was chosen by the cardinals to resolve an impasse. The progressive candidate and the conservative candidate could not win the election, and Lenny (Jude Law) was selected as a bridge between the two positions. Unfortunately for those behind this move, Pope Lenny is far more conservative than anyone had dreamed of. He recalls the Papal Tiara from its rightful place in museum so he can wear it, he refuses to address the public, he introduces screening measures against homosexuals in the clergy, he forbids the absolution of abortion in confession, and insists the cardinals kiss his feet. As Cardinal Spencer observes, Lenny’s mentor and the passed-over conservative candidate for the papacy, ‘The young are always more conservative than the old.’

Jude Law’s character is the anti-Francis: the inverse of the liberal dream of a progressive reformer to bring the Church into the 20th let alone 21st Century and reunite Catholicism with its merciful Christian roots. I wrote a year or so ago about such a dream, still being a bit liberal then.

The Church is old, very old. So old that even its teachings that are usually associated with political conservatism are relatively new (it is over ten times older than capitalism, for example). To me, Francis’ tactic for Church reform is not to introduce something new, but to remind the Church of its ancient past: to bring it back to an older, more inclusive and doctrinally ambiguous version of itself prior to its contamination by the Ancient Greek tradition, Roman imperialism, and global capitalism.

I stand by the idea that Church has a rich tradition of mercy and charity in its past, but it also has a rich tradition of imperial oppression and arbitrary persecution. Which destiny the Church will claim is a question for it. It is always a question of conservatism, but which tradition is to be conserved: charity or empire? mercy or fear? love or power? Which destiny will the Church own? The Young Pope plays out this contradiction through the titular character with a surprisingly Hegelian answer: both.

Pius is simultaneously cruel and kind, vengeful and merciful, naive and wise, atheist and theist, mad and sane, emperor and priest. This the only way I can personally resolve the conclusion. The series starts off like one of the later series of the original House of Cards: the ruler must use Machiavellian tactics to maintain and expand his power. It feels like a thinly veiled critique of the dark content of Catholic tradition and doctrine. As a critique, all it needs to do is display this content by allowing a Pope character to activate long abandoned precedents, wipe the dust off them, and use them.

One could imagine a similar story about a British Monarch who, not content to only have potentially absolute power, starts using that authority, sending the elected establishment into chaos. Similarly, the cardinals around the Young Pope do not know what to do to stop him. Several attempts are made to depose him, yet all fail because the perpetrators’ consciences get in the way. ‘I couldn’t do it’, says the secretary of state, ‘I couldn’t get him to sign his own resignation.’ The cardinals, not able to fully tap into either the merciful or vengeful Catholic tradition are paralysed between the extremes.

As the series progresses and Pope Lenny’s psychological issues begin to be resolved, he starts to mellow. Finally, in the final scene, he smiles kindly in his first truly public address and encourages the faithful to smile also, spreading love and happiness. And so, it seems that Pope Pius XIII, who at the beginning of the season taps into the worst of the Catholic tradition, has finally come to affirm what is best in it, forsaking his archaic views and even appointing a gay cardinal as his secretary. But, this is not the lesson. It is not about moving from a false inheritance of the corrupt tradition to the authentic inheritance of the divine tradition: Pius is empire and charity at the same time, just as is the Catholic Church is in reality.

The Church is was, is now and ever shall be the smiling face of kind corruption and oppression. The gentleness of John Paul II is at the same time the statement that campaigns for equal marriage are the result of an ‘ideology of evil’; the sacrament of reconciliation is at the same time the vilification of contraception resulting in uncountable deaths every year (totally uncountable if you happen to include abortions in that number, which the Church do); and the comforting silence of the church is at the same time the quietism implicit in all religion and all charity. In short, a Pope is always a tyrant with a smile because the Catholic God is love, but only because love is also power.