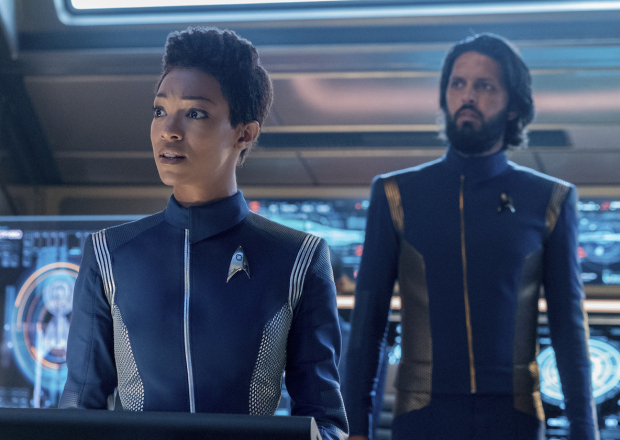 Popular culture is an insight into the culture that created it. But, one or two precious examples are so long running that they also show an insight into how that culture changes. Star Trek is the archetype of such a text. Having a relatively consistent logic (in contrast to Doctor Who, which develops through perpetual // revolution), Star Trek is a stable lens. It is always about bringing the best out in us by showing us at our utopian pinnacle, as is conceivable in the time the writers live in. This means it tells us a lot about how that time conceived its faults and its potential salvation.

For this reason it is particularly interesting to track changing attitudes in Star Trek through its various series. For example, in TOS, AI is always presented as either the threat of automation, as inferior to humanity, or both. The computer M5 threatens to put Kirk out of a job by being more efficient, but lacking a moral compass, leads to the death of hundreds of personal. From TNG onward, however, AI is always presented as genuine humanity. The pinacle is reached in Voyager‘s Doctor, with Data in TNG being a transition, where he is not qualitatively human, but deserves formal equality. This corresponds to a growing comfort with technology, from luddite to cyborg.
Similarly, we can laugh and cringe at ways in which earlier Treks do not push boundaries and merely repeat the predjudices of their time. Whilst TOS worked hard to present a multicultural egalitarian future with men and women working together, it failed to completely overcome the sexism of the time. It consistently failed to problematise gender politics. For example, with ‘Mudd’s Women’, no one bats an eyelid about the fact that Harry Mudd is selling wives. The moral problem arises because their beauty is fake, provided only by medication. One can sell women, but pretending ugly women are beautiful violates trading standards. TOS is pro-women in the sense of the lecher: it loves women, bigly. It wants women everywhere. Nobody loves women more than Star Trek.

In contrast, later Treks try hard, though imperfectly, to combat patriarchal representations of women, in line with the slow but sure tendency of spirit after second-wave feminism. In the mid-season finale to Discovery, another such transition appears. This one regarding its portrayal of mental health. Star Trek, in keeping with popular predjudice, mental health in Star Trek has been stigmatised. The madman in TOS is equivalent to the irrational and the evil. The man who loses control and a fortiori fails to be a man. In TNG, we have a counselor, because mental health is something that it is rational to manage. Madness is something to speak about in a controlled environment so that one does not lose control in a crucial moment. But, it is essentially controllable if one does the right things. The demons can be placed firmly in their box.
Picard’s various torments are good examples of this. Picard is subjected to an unthinkable violation in being assimilated. But, all he requires to overcome this trauma is a few days at home and a punch up with his brother in a stream. Apart from the odd moment of staring into space when it is brought up, something probably coming more from Patrick Stewart’s performance than the script, it is never an issue again in the series. In the excellent second half of ‘Chain of Command’, where Picard is tortured, the episode ends with a conversation with Tory. This implies that Picard will need considerable time to overcome what has happened to him. but, it is never mentioned again.
Picard’s trauma in assimilation does not make an appearance until Star Trek: First Contact. In this film, as excellently pointed out by Red Letter Media, Picard is insane to the point of breaking character. Suddenly, the gentle philosopher-captain is a murdourous maniac, Captain Ahab chasing the whale to the utter destruction of all. In short, in the series the issue of Picard’s trauma was brushed under the carpet. For the film, they wanted a Moby Dick reference, and presented the trauma as irrational uncontrolled violence.

In Star Trek: Dicovery’s mid-season finale, we see a new portrayal of trauma. The security officer has been tortured, and despite seeming for a few episodes to be absolutely fine, completely breaks down into shock while on a mission, reliving his torture. The condition is acknowledged by the counsellor-admiral as PTSD, and he needs to be rescued by two women to be saved. The final scenes in the episode with this character promise that this arc is going to continue for a long time, as it would in real life. There are some spirits that cannot be forced back into pandora’s box, where true strength comes in acknowledging them and living with them. The answer to mental health is not to buck up and apply manly control, but to seek help and accept vulnerability.

I just hope they don’t ruin it by making it being imposed on him by alien technology or something.