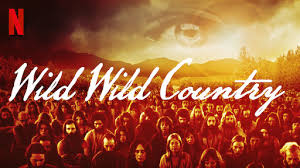 The terribly titled Wild Wild Country is the best and only docu-series I have ever watched. It tells the classic American tale of a group of settlers who, escaping alleged persecution in their own country, attempt to found a city in the land of opportunity. In doing so, they disrupt the lives of the native inhabitants. The trouble is, the religion is not Christianity and the natives are rural Republicans. The Rajneeshee cult, before long, arm themselves with a militia and poison food supplies with a manufactured strain of salmonella in an attempt to influence a county-council election.

The strength of the documentary is its perspectivist direction. There is no narrator, no explicit narrative, and no explicit moral message. Speakers of all sides are presented as giving their account, with interviewers’ questions heard only in rare instances. This allows the narrative to develop with as little manipulation as possible. But, of course, all direction is manipulation and a director’s decision as small as the camera angle is a moralising intervention. That said, the directors achieve neutrality far more effectively than BBC News. Opposing views are not presented as equal, but as differing. One might almost say that the narrative is curated rather than directed, unfolding organically in a way that makes Deleuzians aroused.

This strength as a documentary is, however, its weakness as a philosophy. The documentary lets the story be. The clash of perspectives raises the problems. But, questions are left unanswered. This is, of course, deliberate. To raise this as a criticism would be a category error. Nevertheless, the documentary raises problems to which it has no answers. The task of a philosophy is to reckon with those problems.

The prime problem raised by Wild Wild Country is that liberals do not know what to do with religion. The documentary is, itself, through a liberal lens: each perspective is important, truth is subjective, there is no arbiter. The absence of a true narrative, the affirmation of subjectivity, and valuing of the individual gaze are symptoms of what Nietzsche calls the Death of God: the historic loss of the power of the idea of ultimate truth to command belief in ultimate truth. The liberal, as embracing the lack of personal truth, has to be an agnostic. And, therefore, has to view anyone who genuinely believes in anything to be a brainwashed idiot.

But, Wild Wild Country demonstrates as well as anything that being-brainwashed doesn’t make one an idiot. The Rajneeshees interviewed are all intelligent people. Equally, “brainwashing” as a concept does not really fit very well. Even the most harrowing example, a calm, emotionally intelligent and seemingly nice woman who found herself actively complicit in assassination attempts and personally attempted murder of the cult-leader’s doctor, can’t really be described as “brain washed”, as though the relevant critical will was originally present. She actively sought the Rajneeshee religion, moving her entire life internationally just to be near what she had valued as the truth in the reading of Rajneesh’s books. We can see that this desire in good faith was directed and manipulated, maybe, but this falls short of a sufficient explanation. We have to incorporate the gleeful commitment to the religion. Only on the basis of her ecstatic binding (something like an adequate translation of relegare) can we understand what happened to her. She saw something in Rajneesh, and genuinely and beautifully gave herself to it.

There are two ways to adequately account for the ecstatic binding involved in religion. The first is to believe it is a response to the divine. The second is to recognise that people are genuinely moved by something in excess of rationality. Liberalism can’t really handle either, because it thinks humans are fundamentally rational, whilst at the same time defining illiberalism as irrationality. If the religion is “moderate”, which is to say that it extensionally agrees with Liberal precepts, then it is a fundamental right to believe in something that makes someone happy. If it is “extreme”, which is to say it disagrees with Liberal precepts, then it is idiots being brainwashed. But, as long as we fail to recognise the very real and joyous will-to-irrationality, we’ll never understand the religious.