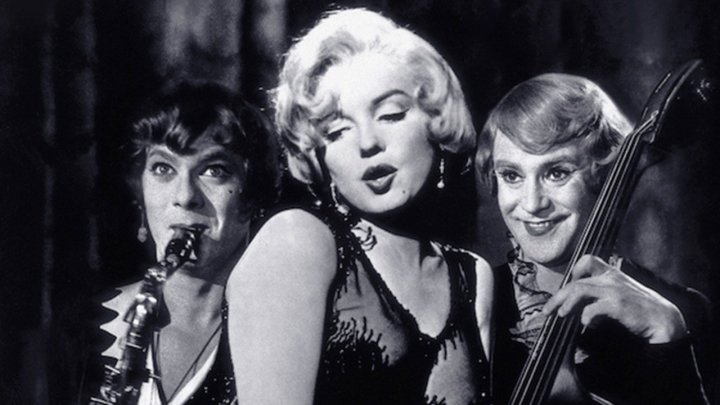 Some Like it Hot, the 1959 classic and one of my favourite films as a child, is currently on Netflix in the UK. The film sees two impoverished, male musicians (Tony Curtis and Jack Lemon) on the run from gangsters after witnessing a murder in Chicago. Their only chance of escape is by posing as women, filling a last minute vacancy in a women’s band heading to Miami. Their safety, and friendship, depend on their plan to run away as soon as they arrive, but unfortunately they both fall in love with lead singer and Ukelele player, Sugar (Marilyn Monroe).

The humour of the film can be understood as arising out of the insurpressibility of the men’s masculinity. It leads them into absurd situations, particularly Jerry (Lemon), who attempts to seduce Sugar, giving no real thought to how she might react to find that a man has intruded into a woman’s space. Within this space, Jerry operates like the id, desperate to satiate his desires but not really knowing how. While Joe (Curtis) tends to avoid the other girls in the band, Jerry goes swimming and plays volley ball with them. He throws himself as far into his feminine persona as possible, but his masculinity is never far beneath the surface. In one scene, he storms into his and Joe’s shared hotel room.

JERRY: Why, that dirty old man!
JOE: What happened?
JERRY: I got pinched in the elevator.
JOE: Well, now you know how the other half lives.
JERRY: (looking in the mirror) And I’m not even pretty.
JOE: They don’t care — just as long as you wear skirts. It’s like waving a red flag in front of a bull.
JERRY: I’m tired of being a flag. I want to be a bull again. Lets get out of here, Joe. Let’s blow.

Jerry is frustrated because he has been given the greatest opportunity in his life to “be a bull”, but the very mechanism that got him there forces him to be a flag. Now, if Jerry is the id, Joe is the ego. He at least has the self-awareness to adopt an male investment-banker alter-ego (called Junior) in an attempt to eat his cake and have it. By being aloof as “Geraldine”, he can offer sage advice to Sugar, and reep the benefits of this advice as Junior.

This farce from the past plays out fears of the present. The anxiety of so-called ‘Trans-exclusionary radical feminists’ is born from the misguided belief that trans women are just like Jerry and Joe; the belief they are men, entering women’s spaces, in order to reap the benefits of that space. There is no doubt that this is something that some men do, let us not forget Toby Young. But, it cannot be argued, on the back of these cases, that trans women are sexual predators. What Jerry and Joe do in Some Like it Hot is immoral and predatory. But they aren’t trans women. They’re men in dresses. They are their own category.

The film teaches us a lesson about gender: it is not a choice. If it were, Jerry and Joe could have adopted perfect disguises, and their masculinity would have evaporated. It did not, however. Whatever gender is, it isn’t a life choice. This is in fact part of one strain of so-called TERF argument: men can’t choose to be women. But, this is only as true as “men can’t choose to be men” and “women can’t chose to be women”. This has to be extended to say that trans-people aren’t just choosing their gender either, they are who they are. I think that “TERF anxiety” probably comes from not actually knowing anything about trans people at all. A really good place to start on that, would be to watch this video essay.